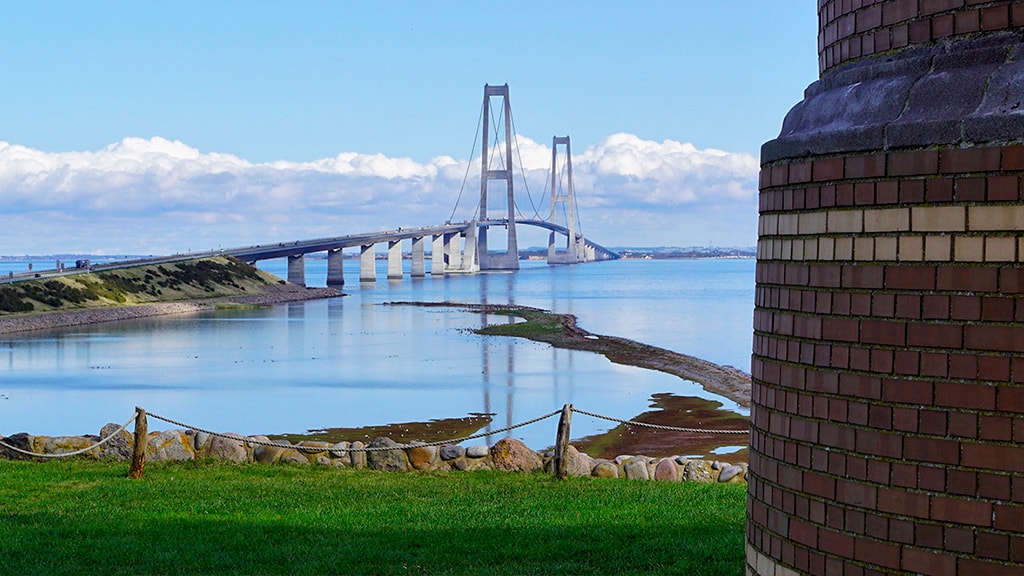 The Great Belt Fixed Link is one of the largest bridges in the world, and you get some inkling of the mammoth work that went into its construction when you cross the Great Belt by car. The structure incorporates the Eastern Bridge (a suspension bridge), Western Bridge (a low-level bridge) and the Eastern Tunnel for the railway (an undersea bored tunnel.) The complete link between Zealand and Funen is 18 km long and was built between 1988 and 1998. On average, more than 27,000 cars a day traverse the bridge; on busy summer days in the peak season, the traffic may comprise up to 40,000 cars a day.
The Link interconnects the regions of Denmark and has made getting around Denmark a lot easier. The Eastern Bridge – the big, light suspension bridge with its characteristic cable profile and two 254 m pylons are the highest points in Denmark and bear the cables whose free span of 1,624 m is the second longest in the world. The Eastern Bridge itself is 6,790 m long, with a passage height of 65 m.The Eastern Bridge has become a popular symbol of Danish expertise and sound craftsmanship.
The East Tunnel for trains at 8,024 m long is Europe's second longest bored tunnel after the Channel Tunnel between France and England.

Prices and further information about the trip: www.storebaelt.dk

Half way across the Great Belt is the island of Sprogø, where the bridges and the tunnel meet. The little island and its lighthouse have played ever-changing roles in the history of Denmark.

Visit Southwest Zealand Tourist Information Office is only too pleased to organise guided tours to the island.
Adres

Only visible from the outside