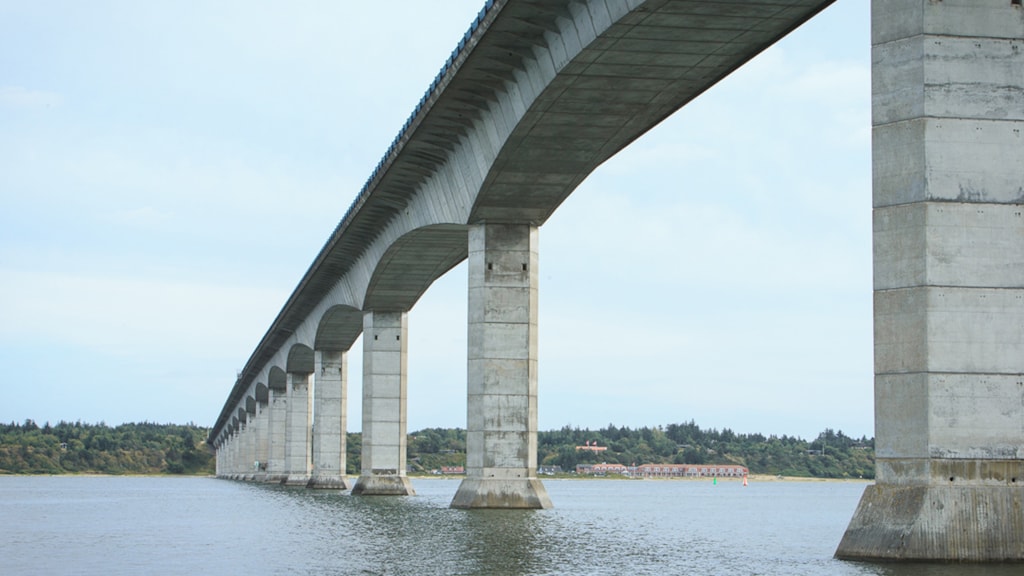 The Sallingsund bridge was erected in 1978. The total cost of the bridge, incl. all it's connections at land was DKK 221 millions. This money has yielded the province a very long bridge. The bridge is 1.730 m long distributed among 17 sections at 93 m and two sections in each end at 51 m. The maximum height of the bridge in relation to the sound is 30.5 m, and where the bridge connects to land it's 25 m above water level. The bridge is 16 m wide with two sidewalks, two bike paths and two lanes. There's a sturdy railing on each side, that are partly sealed at specific heights because of the strong north western winds.

The vertical clearing for ships is 26 m between the 8th and 9th pillar, like the 9th and 10th, where the depth of water is 15 m. The amount of building material has been large. For the substructure alone was used 12.000 sq. m. of concrete, 1.700 tonnes of reinforcing and 900 tonnes of so called prestressed reinforcement. The Sallingsund bridge has been equipped with storm flaps in consideration of traffic safety - thereby obscuring the view when driving. Therefore, it's advised to park the car at the parking space in Legind Bjerge and walk out on the bridge.

Her royal highness queen Margrethe the 2nd opened the bridge for the public, Tuesday the 30th of May 1978.