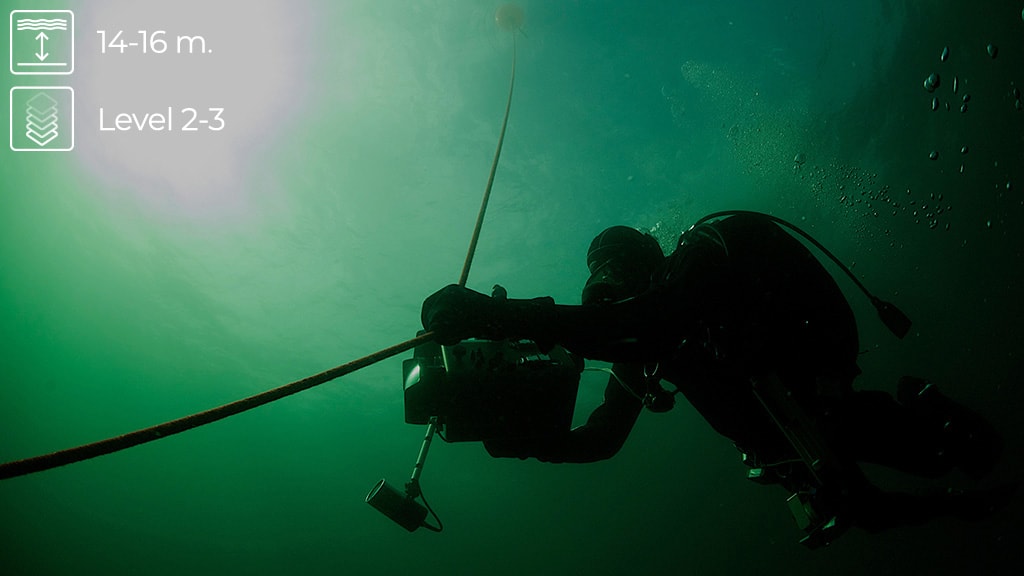 Wreck dive: The Steam Trawler - The southern part of the Langelands Belt

The wreck is presumably of a ship that was once used as a freighter and it sank after hitting a mine in 1919. Today the wreck is beautifully overgrown with sea squirts, mussels, sea-anemones and other invertebrates.

Wreck Type: Steamship - length circa 30m, width circa 6m
Depth: 4 to 16m
Highlights: The front portion of the ship.

Safety
You must always fly the A-flag when diving, a boat handler should remain on board when divers are in the water.

About The Steam Trawler
The wreck known as the Steam Trawler is presumably of a ship that was once used as a freighter. We know that the ship sank after hitting a mine in 1919. Not many other details are known about this ship, which today is partially broken up and rather corroded. The wreck is around 30m long - a little bigger than the wreck of the Binz, which is only a few minutes sailing from here. When the wreck appears on the sonar, it can be seen immediately that it is raised up at one end.

When you descend onto the wreck you will discover that it was the starboard side of the ship that caws clearly seen on the sonar.

The foreparts of the ship are still standing upright, and if you excursion a little caution it is possible to swim into the ship. The cladding has fallen off, and you can see right through the wreck. The light plays beautifully through the holes, and a few large cod can often be seen standing in the front part of the wreck. The bows are the highest part of the wreck, and are still intact. They face north, and when back-lit they make an attractive, but difficult subject to photograph. The wreck is beautifully overgrown with sea squirts, mussels, sea-anemones and other invertebrates.

When you swim from the largely intact front part of the wreck towards the stern, you will pass a large boiler and other engine parts, which tray can be difficult to identify. On the starboard side you will find the remains of large metal plates that have fallen from the wreck, and are now lying on the seabed. This is an exciting area and is constantly changing due to the effects of the sometimes strong currents here. These plates provide shelter and a hiding place for big cod and other fish. Around the wreck the sea bed consists of light colored sands and the occasional mussel bed. If you make an excursion out over the seabed here you will find debris from the wreck everywhere.

Moving further towards the stern you will find the steering gear, but it is becoming hard to see amongst the tangled collection of collapsed debris. The stern of the ship has suffered the most. Here and there some of the frames are still standing, but elsewhere they lie on the bottom with the remains of the large plates. Due to the continuous degradation of the wreck, new, exciting items may appear, so always keep a close eye on what is hidden in the wreckage.