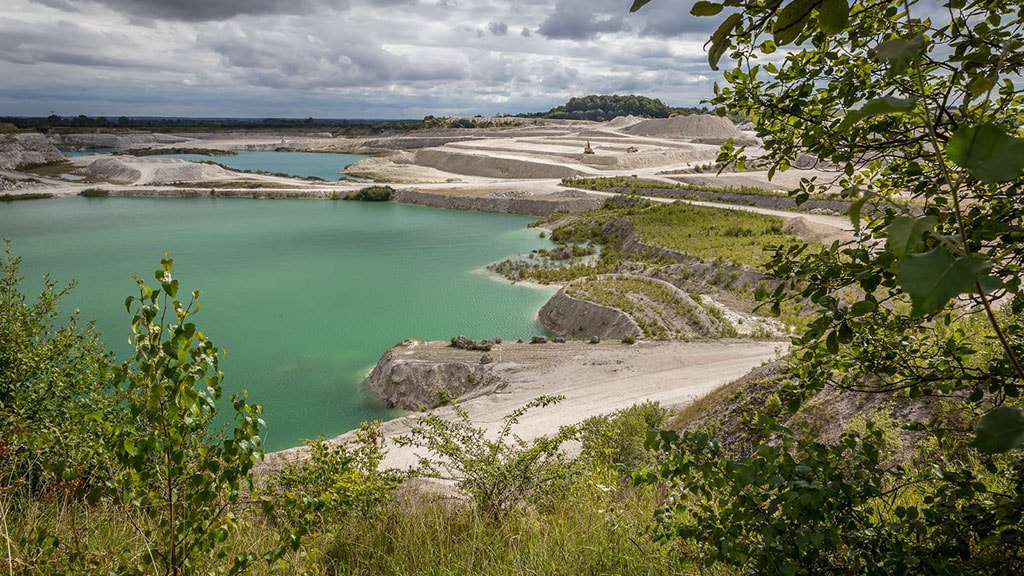 In the middle of Zealand is Faxe limestone quarry - a piece of Danish history that has had great significance millions of years ago!

When you go down into the limestone quarry, you are at the bottom of a 63 million year old ocean.

You do this because 63 million years ago Faxe limestone quarry was covered in water, where giant sharks, crocodiles and many other exotic animals swam around. You can still find relics from this time when you visit the place, and that is exactly why the place is very popular with families with children. But also others are attracted by the many things that take place in and around Faxe limestone quarry.

The sharks, crocodiles and squids that swam around between corals when the lime quarry was covered with water are the ones that, together with the sea's many other animals and plant organisms, formed the lime. The limestone therefore contains fossils of all these corals, shark teeth, crab shields and mussel shells that were in the sea at that time 63 million years ago.

We humans have used lime as a building material for many hundreds of years. In the old days, lime mining took place by the farmers digging smaller lime balls, which were thrown back when the mining was finished. It was not until the middle of the 19th century that a permanent quarry was established owned by the estates Vemmetofte, Bregentved, Rosendal and Gavnø.

In the year 1900, 200 quarries worked in the limestone quarry. A quarryman typically came from a quarrying family. He started his working life earning a living on a farm, but started working in the quarry when he got married. With a little luck and skill, at the age of 40-50 he would have had saved enough money to buy a homestead.

On a fossil hunt in Faxe limestone quarry

The limestone quarry is popular with families with children. You can explore nature and find the 63 million year old fossils from the animals of the past - and you can take them home!

Geomuseum Faxe arranges guided fossil hunts, but you are also more than welcome to walk around on your own. If you find something, Geomuseum Faxe will also be happy to assess your findings, so you know exactly what it is you are taking home. The Geomuseum also conveys much more about the history of the limestone quarry and the area - you will find it right on the edge!

Being in the limestone quarry: Put on shoes with solid soles. If you want to find fossils, hammer and chisel (can be rented at Geomuseum Faxe and Faxe Vandrerhjem) are good aids. Do not climb on the lime piles, which can slip and keep distance from working machines. The sun can be very bright, so always remember to bring water, sunscreen, sunglasses or a hat when you go for a walk in the limestone quarry.