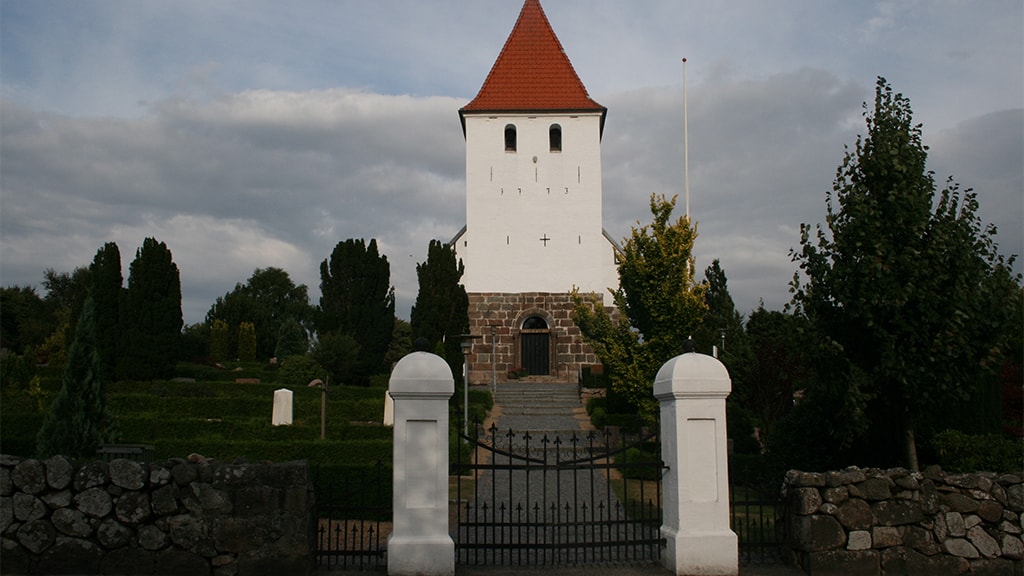 Føvling Church is one of the best preserved granite churches in Jutland. The church is certainly built in 1200-1205, and the northern side of the church is almost unchanged. The church was originally situated in an open landscape, but around 1880 the village Føvling was built around the church. Ribe Cathedral has been used as inspiration for the Romanesque ashlar church.  The tower was built in 1773 in large bricks, it was whitewashed, and it replaced an earlier and higher tower, which in those times served as landfall “Føvling Church with its red flame”.

Føvling Church has at times belonged to the owner of Sønderskov Hovedgård south of Brørup. The church’s original wood furnishings were severely damaged during the Swedish wars 1657-1660, where the soldiers used the church as guard room and the furniture as fuel. The baptismal bowl is the church’s original. The other furniture has adapted to changing times, and the church appear in late baroque and with individual murals. The altarpiece is from 1753 and carries Sønderskov-owner Samuel Nicolaus Claudius’ crest. The alterpiece paintings show institution of the supper, and it is the original from 1753. In the porch, there is a runestone with a Latin inscription. It is believed it has been put over the church’s builder.

The aisle has two doors, that sit opposite each other on the south and north side, and they are almost identical. The two column portals which are of granite, can be connected to one of the legends about Føvling Church. The story is about two men who was bitter enemies, that they could not use the church door. Therefore, two doors were made. The one who died first would have his door bricked up. The story might be true because a royal letter from 1596 says that there must be a certain seat for Peder Juul and his wife. The counterparty is believed to have been the owner of Nielsbygård south of Føvling. In the Cemetery, there are six refurbished tombstones from the genus Elbæk. The tombstones are protected.  In 2014, they were revived with “refreshed inscriptions. The Limestones was ravaged by time.

The 12 cm large owl, which was common in Denmark for years can still be seen near Føvling Church. It does not live in Church buildings, but at a house nearby.