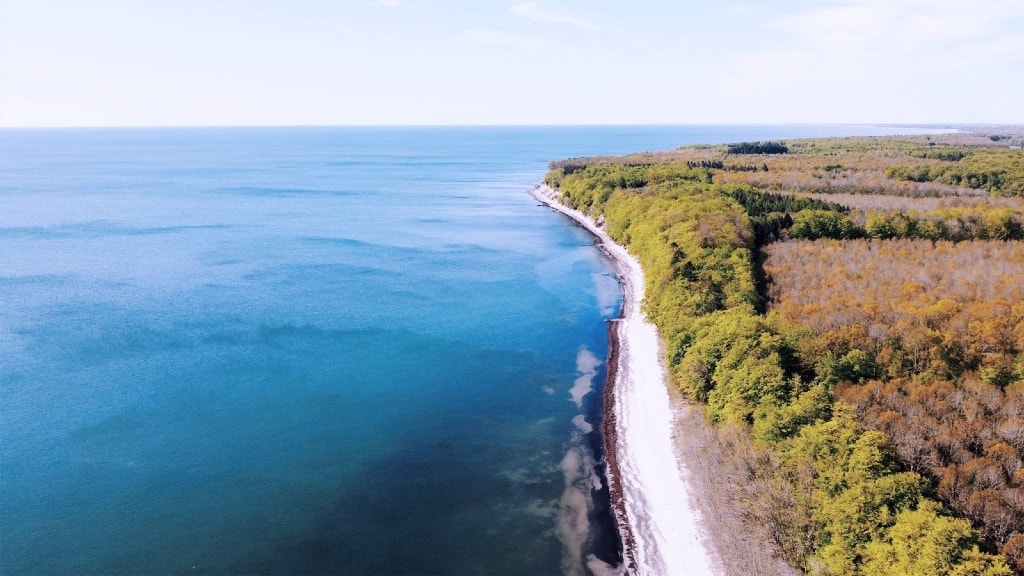 Hesnæs forest consists primarily of deciduous trees such as Beech, Oak, Maple and Ash. The trees run right out to the steep cliff, from where there is a stunningly beautiful view out across the water. From the northern part of Østerskov cliff, there is an excellent view of Møn. The coast offers points, rocks and sandbanks with attractive opportunities for angling. During spring and autumn it is possible to catch trout and in early summer - garfish. It is possible to go bathing at the sandy beach south of Hesnæs.

Plant and wildlife
There are meadows and wetlands in the forests. One of the largest fresh meadows is situated south of Hesnæs, protected by a small embankment. The forests are home to an exciting array of plant life and contain five species of orchid, including the rare Bird’s-nest Orchid. Spring sees the bloom of the white, yellow and blue Anemone, the latter two being quite rare. Wildlife in forests includes stoats, weasels, martens as well as roe and fallow deer. The Goosander breed in nesting boxes and the Oriole breed in the forest. The forests, meadows and wetlands contain a wealth of insect life. Østerskoven forest is suitable for picnic excursions and renowned for its abundance of mushrooms, including many species of Boletus, from late July until the frost sets in.

Ancient monuments and trails
The most significant ancient monuments are the 30 m long by 12 m wide long barrow Ørnehøj mound just north of Hesnæs, which contains an 8 m long passage grave, and a redoubt a couple of kilometres north of Hestehovedet. It was constructed in 1808 as a defence against the English. The forests contain approx. 400 burial mounds. The quality of the system of trails varies. The main pathways are excellent; however, several of the smaller trails, including the coast trail, are impassable for the walking impaired.