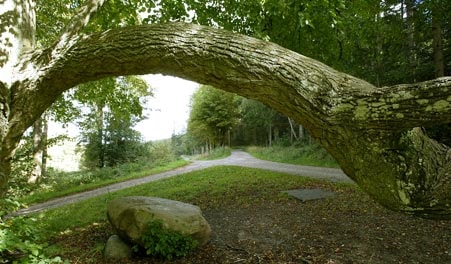 Contact
Start from Skovfogedvej (parking lot at Forest playground)
Lystrup forest is a high-altitude forest, as a NV-Lake-cutting valleys split into an eastern, hilly and somewhat flatter a westerly portion. Eagle marsh and meadow, which divides the forest into two halves, traversed by Gørløse river which starts from St. Petersburg. George Lake, and runs to Havelse river. Gørløse stream is a small stream, while the hills around the river is impressive. To the east is the Himmerigsbakken who complete the elongated ridge that lips out in the countryside and is related to subglacial system at Mølleåen. Here in the forest ends abruptly, and behind it there is a gorge called Hell Hole, but rises again around Kongebakken. Lystrup have originally been part of a larger Northern Zealand forest area, but as the forest was cleared and cultivated forest was divided into smaller areas. Woods were often driven back to places where conditions for farming with primitive farming tools, were less favorable, and the hilly terrain in Lystrup Skov holds a lasting memory from that time, for over 200 years ago when an ordered forest for the first time introduced large scale in Denmark. The tour starts from the big linden at Skovfogedvej (parking lot at Forest playground).
The leaflet is available on the Frederikssund Tourist and Travel stable in Jægerspris.
Adres