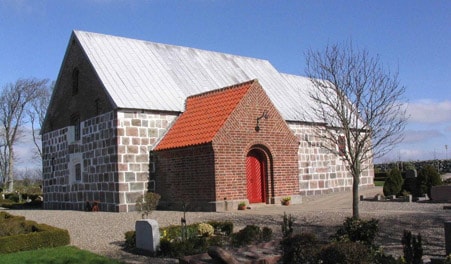 When the inhabitants of Lyngs. Torp and Jestrup had decided to build their stone church, they began to collect the big granite boulders which had been left in the fields by the ice when it drew back after the Ice Age.

About 1200 the small Lyngs church rose from dressed ashlars. The stone that could not be used for the church were soon used for the beautiful tall stone wall oround the churchyard to protect the grave from the farmers' cattle. The church at Lyngs never got a tower though there were plans for it at the beginning of the 20th century. As a remnant of the original wooden churches the bell frame is still leaning against the east end of the chansel. The bell is from the 1300s (see picture).

Because of the rough climate in west Jutland the joints between the ashlars were often painted. This is still kept on Lyngs church and gives it its characteristic look. Carelessness at repairing the walls has resulted in replacing some of the ashlars with mediaeval large bricks. The roof of the church is as at Hvidbjerg cast leaden plates.

The porch is new, built in 1917. Here the plate of parish meeting hangs. When the plate said "Announcements", people knew that they had to wait outside the church to learn about new laws and notices.

The door of the church is very low. As in other Romanesque churches there has been another door. It is seen clearly outside on the northern side of the church. Inside to the left of the chansel arch a big crucifix from the 1400s. Of the four evangelists symbols on the arms of the cross only St. Matthew' angel is preserved.

The pulpit is from about 1600 and has sections with paintings of the four evangelists together with scriptural passages. The baptismal font is a so-called Thybo-font, which like others may have been shaped at a workshop in this part of the country. The Nürnberg basin has the Annunciation of the Virgin Mary as a motif.

Inside the chancel an original Romanesque window is preserved. The square hole further down in the wall may be a slop sink where the wash water was poured out after the Communion. The alter piece from about 1600 has painted sections from 1893. In 1719 it was restored and decorated with rhymed stanzas by Anders Gundahl.