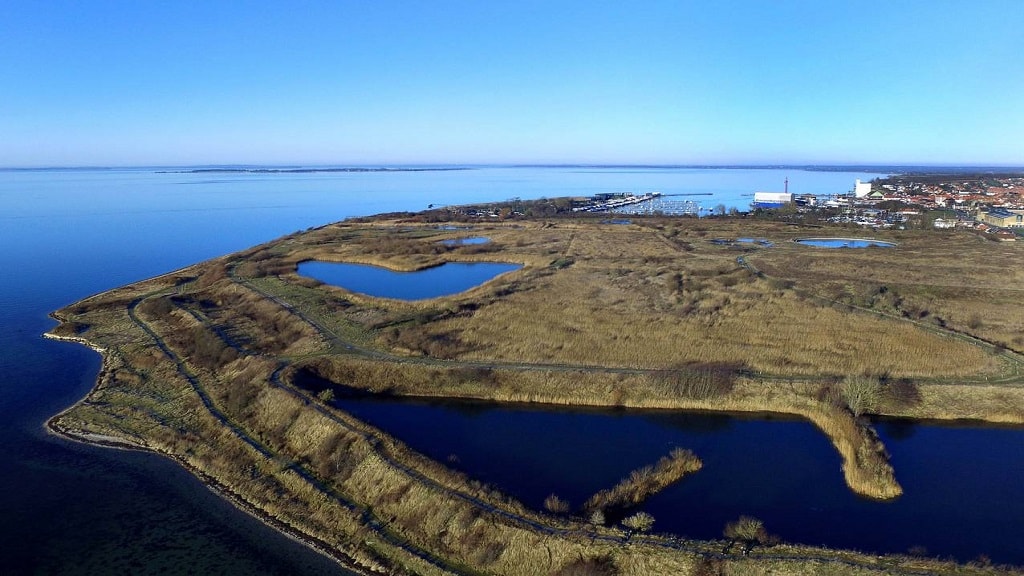 The Soil Basins in Assens

Assens Sugar Factory that existed from 1884 until 2006, produced sugar from sugar beets. Large amounts of soil came with the beets delivered from Funen, Langeland and parts of Jutland. The beets were then washed with water from the sea.
The Soil Basins were created on a low lying beach by making a surrounding embankment. Over time the area was filled with soil from the beets and now stands about 10 meters over sea level.

The soil Basins cover an area of approximately 40 acres. In the last production years, soil deposits were about 100,000 tons / 45,000 cubic meters per year. In 1995 a biological cleaning system and biogas production started. Several concrete foundations from the earlier cleaning facility can still be seen.

From the Soil Basins the sugar factory's former headquarter can be seen, and now functions as council offices for Assens Council. The dominant and restored chimney is a reminder of Assens industrial past together with The Juice Station /Saftstationen and Arena Assens that is now th town's sports center with fitness rooms, restaurant and toilets.

Previously, there were several sugar factories in Denmark. Today only two remain active, one in Nykøbing Falster and the other in Nakskov. The latter also houses the "Sugar Museum".

As her in Assens the former sugar factory in Stege (closed in 1989) has also preserved its its soil basins for recreational purposes.

The Soil Basins, the buildings and the surrounding area represent a unique piece of Assens' cultural and industrial heritage.

Warning: Access to the area is your responsibility. Do not venture to the edge of the basins as they are very steep and fragile. Please keep to the paths and keep children under constant observation. Dog must be on the leash.