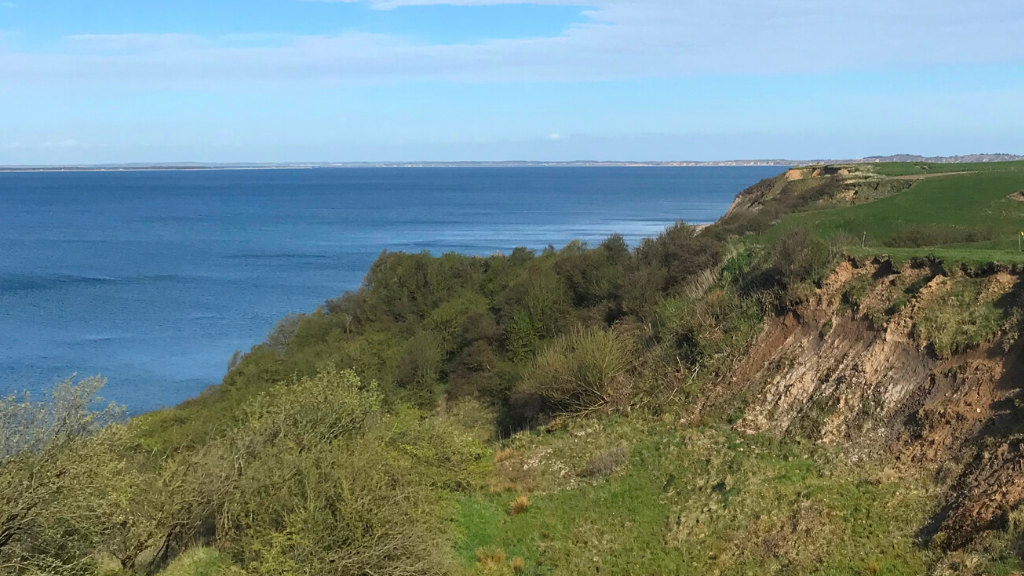 Hike: The track by Høgsgård and Hunskjær, Nr. Nissum, Lemvig

Foto: VisitNordvestkysten, Lemvig
Attractions
Natural areas
The farms Høgsgård and Hundskær, which lay ground for some of the trail you come through, are old family farms in Northwest Jutland. Hundskær has been owned and run by the same family for six generations and Høgsgård for five. The view of Nissum Broading in the Limfjord takes one's breath away. When the weather permits, the eyes can extend all the way to Thy, Mors, Salling and Thyborøn. The trail takes you through the characteristic ice age landscape with a ridge formed by soil, gravel and rock. Out towards the Limfjord, meltwater valleys cut through the landscape, allowing the melted ice to flow into the fjord.
Adres

The trail at Høgsgård and Hunskjær lies about eight kilometres east of Lemvig. The marked route is about 2,5 kilometres long.

For the sake of the heifers, it is important that you keep your dog on a leash.

The trail starts at Gejlgård Bakke with a breathtaking view of Nissum Bredning. In clear weather you can see Thy, Mors, Salling and Thyborøn.

Gejlgård Bakke is a ridge formed during the last ice age. The iceberg stopped here. The hill is formed of soil, gravel and rock, which the ice pushed in front of it. The landscape towards the Limfjord is characteristic with many meltwater valleys with streams. You can see the valleys cut through the land so that the water from the melting ice could flow into the fjord.

Høgsgård and Hundskær are both old family farms. Hundskær has been owned and run by the same family for six generations and Høgsgård for five.

On the north side of the slopes the landscape is harsher than at the start of the trail. The learned cliffs rise 25-30 meters above the narrow beach of the Limfjord. Down towards the beach you walk through the forest of thorn bushes. Grazing heifers have sprouted the trees in this characteristic way. At high tide, the waves eat off the cliff's foot. In some places, the Limfjord can take up to several meters of agricultural land per year. Trees and shrubs are shaped by the salty wind. Only the most robust can grow here - for example, sea buckthorn, whose yellow berries light up in autumn and winter.

On the walk around the trail at Høgsgård, the green pastures dominate. The grass is an important feed for dairy cows, heifers and calves that go out during the summer.

Perpendicular to the coast, you will meet here some dykes. They are probably several hundred years old. They are established by turf, and have probably been somewhat higher than today. The dykes have both served as a distinction between the two properties and as shelters for the harsh wind. The poets are now protected.

Hundskær's large grassland has mixed fences in several places, providing habitat and hiding for the game. The creatures in the fields also seek shelter when the west wind becomes too sharp.