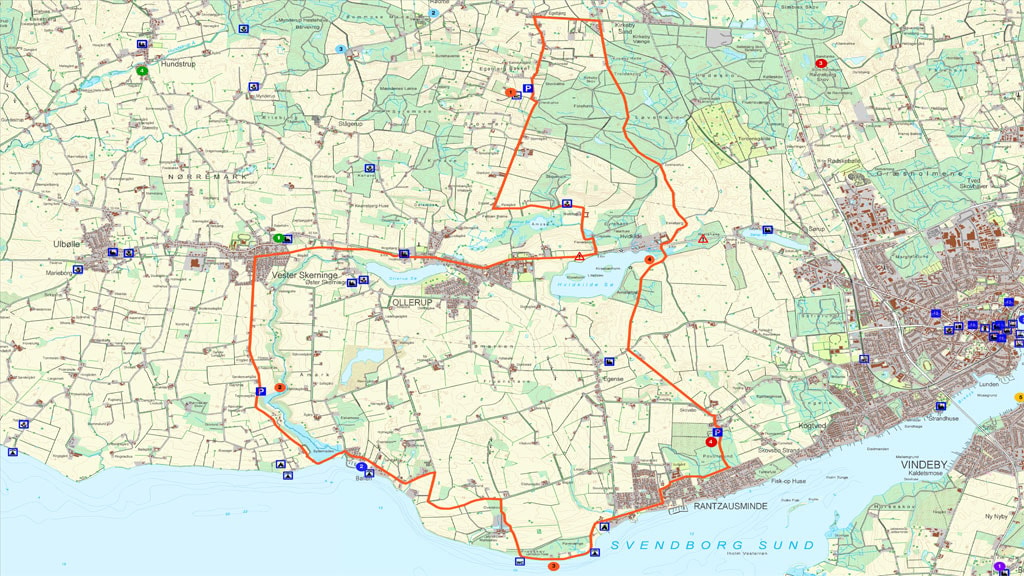 Abreast with the glacier

It is thanks to a huge glacier, a gigantic moving lump of ice, that we can enjoy the varied landscape and the archipelago of the south of Funen today. On this route, you will keep abreast with the glacier, and you will leave it behind. You will see the traces of how the glacier muscled its way through the landscape during the last Ice Age more than 10,000 years ago. In the process, some of the glacier ice melted away. The vast volumes of melt water were good landscapers that dug out large lakes and gave us the hills and valleys where the towns and villages of south Funen chose to settle and nestle.

The south of Funen is characterised by its rolling landscape. It can be a challenge to cross it on a bike but you are rewarded when you get to the top of the hills by the view. This trip starts on the circular balcony of Egebjerg Mølle, approx. 110 m above sea level. Catch your breath, enjoy the view, and remember that a giant glacier did all the hard work. The massive ice pushed so much gravel and stones in front of it as to create these hills. If you look to one side, you will see Funen at your feet. Look the other way, and you can spot the 55 islands and islets in the archipelago.

The ice, which is our theme on this route, was several hundred metres thick and it worked its wonders without a stop. You may be familiar with a hard Danish winter when the surface ice is hard but where melt water forms and erodes underneath. In the same way, enormous volumes of melt water paved the way for the lakes of Sørup, Nielstrup, Hvidkilde and Ollerup. You will pass several of them but we suggest that you make a stop at Hvidkilde Sø! This is the most beautiful of the lakes with views of both Hvidkilde Manor, and the islets of Storeholm, Kirsebærholm and Lilleholm.

The glacier was fi nishing its job in the landscape of south Funen and started melting. Among other places the traces can be seen here today, in the meandering stream of Syltemade Å. In the fi nal phase melt water came gushing out of the ice mass and carried enough gravel and stones away with it as to leave a 20 m deep ravine – the Syltemade Ådal. This ravine is now a protected area but you can enjoy it and get closer to the stream by parking your bike and continuing on foot following the Archipelago hiking trail, which ends in the scenic little seaside village of Ballen.

Down by the sea you can enjoy another panoramic view across the south Funen archipelago before you pedal on. It is hard to imagine that the many small islands were once connected with Funen but they actually were. It was not until 7,000 years ago that the temperature rose enough for the ice to melt so the sea level rose, forcing the Stone Age people to move their settlements further into the landscape. Today only the highest parts of these settlements remain as islands in the sea. But the Stone Age families were here. Archaeologists have found approx. 40 submerged Stone Age settlements in the area and they are still bringing axes, oars and bows out of the historic seabed.