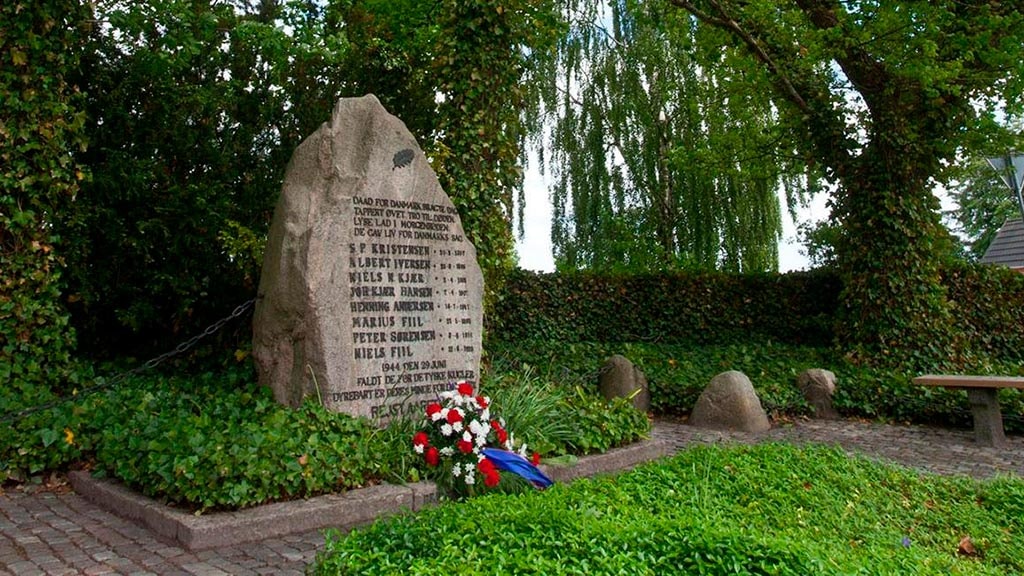 Foto: VisitRanders
Activities
Tour suggestions
Hvidsten Resistance Group (Hvidsten Gruppen) was a receiving group associated with the Danish resistance movement during the German occupation of Denmark 1940-45. The tour leads to some of the sites that are associated with the group's efforts during WW2.
Adres

See the route on a map

Worth knowing about the route

The Hvidsten Group was a group working with the reception of weapons drops, associated with the Danish resistance movement during the German occupation of Denmark 1940-45. The Hvidsten resistance group emerged around innkeeper Marius Fiil from Hvidsten Kro (Inn), and it was tasked with the reception of explosives, ammunition, and weapons, which were dropped from English airplanes and were intended for use by Danish resistance groups. The first drop, which was picked up by Marius Fiil and his group, took place on the night between March 11 and 12, 1943. The group continued receiving drops until the Gestapo arrested most of its members on March 11, 1944. The German court martial sentenced eight of them to death, and they were executed by firing squad on June 29, 1944. Among those executed were the innkeeper, his son, and his son-in-law. This route leads past some of the locations associated with the Hvidsten Group and its work during the Second World War.

Together with his wife Gudrun, Marius Fiil had taken over Hvidsten Kro from his parents in 1925. On the request of Flemming Juncher, the owner of the estate of Overgaard, who was one of the driving forces in the Jutlandic resistance movement during the German occupation, Marius Fiil established a group working with the reception of weapons drops, which was to consist of reliable people from Hvidsten and the surrounding areas. The Gestapo captured most of the members of the Hvidsten Group, and eight of them were executed while another three were sentenced to imprisonment for life. The executions made a particularly large impression because they to such a large extent hit a single family and a single area. Their urns were buried near Hvidsten Kro after Denmark was liberated in 1945, and today in that location a memorial with the eight names can be seen.

Hvidsten is a part of Gassum parish, and a memorial tablet with the names of those executed hangs on the wall in the porch of Gassum church. Every fifth year a memorial service is held in the church on June 29, which is started with a ceremony by the memorial in Hvidsten. The association of the Hvidsten Group with the church in Gassum is marked on the pitcher used for baptisms, on which a memorial inscription can be read.

The first drop, which the Hvidsten Group picked up, took place on Trinderup Hede (Heath). Marius Fiil drove there in his horse-drawn cart to pick up the dropped weapons and explosives. At Fiil’s neighbour’s, these were loaded in a car and then they were driven to a depot in Randers. After this first drop, the group desired to find a location, which was closer to Hvidsten, and the chosen location was given the codename Mustard Point.

Instead of Trinderup Hdde, Marius Fiil chose the former heath near Allestrupgård, south of Gassum, as a drop point, and for about a year starting in April 1943 the Hvidsten Group received at least five nightly weapons drops as well as eight parachutists who were sent to help the Danish resistance movement. Mustard Point was considered to be one of the best drop points in Europe, and in 1997 Frihedskampens Veteraner (Veterans of the Freedom Struggle) had a memorial erected there.

An important place on the Jutland railway was the bridges over the Gudenå near Langå. The bridges were subjected to sabotage in November 1943, which hindered the trains to operate for 12 days. After the sabotage, several members of resistance groups in Randers were arrested by the Gestapo. In November 1943 four saboteurs from Randers and one from Aarhus were sentenced to death. In December 1943 it was announced that a pardon was rejected, and the same morning they were executed by a firingsquad at Skæring Hede Århus.

The poet Steen Steensen Blicher was a priest in Spentrup from 1825 until his death in 1848, and here he wrote a number of his most famous poems and novellas, e.g. “E Bindstouw”. In Blicher’s memorial room in Malvina’s House, one can see some of his manuscripts and personal effects such as his desk. The house is named after Blicher’s much-beloved daughter Malvina who lived in the house after she married the administrator of the vicarage. Spentrup Church is a Romanesque church, constructed from granite ashlar blocks and with a late-Gothic tower. In the chancel arch, well-preserved chalk murals from approx. 1225 can be found, and the votive ship “Tordenskjold” was put on display for the first time in connection with Malvina’s wedding in 1838. Blicher’s burial plot can be found in the churchyard here. In the church in Spentrup, a pitcher used for baptisms can be found bearing an identical inscription to that of the church in Gassum.