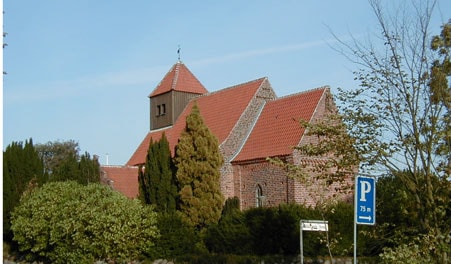 Nebbelunde Church, as it was described in 1859, "little and not impressive"; it is a little building constructed with monk bricks, which consists of a Romanesque chancel, nave and a Gothic vestry.

The roof over the nave´s west gable is made of tree from 1828.

The two clocks on the roof substituted a clock tower made of tree in the cemetery.


There are the remains of a chalk painting, which represents The Holy Anna sitting on a bank with the little Maria with a crown and a book on her left-hand side, and Jesus with glory on his right-hand side.

New developments on the roof were set up in the church in 1828.
Adres